The crisis of stagnant or declining postsecondary enrollment – a concern even before the pandemic – is deepening at Washington’s public two- and four-year colleges and universities. According to data shared with the Washington Roundtable by the state’s public postsecondary institutions:

The decline in postsecondary enrollment contrasts with the increasing economic need for credentialed workers in Washington state. From Nov. 2021 to Nov. 2022, employers added more than 130,000 jobs in Washington. That follows a decade of economic growth when a credential—such as a degree, apprenticeship, or certificate—had become essential for jobs that offer a good salary and advancement opportunities.

Read more about the picture of postsecondary enrollment in Washington in fall 2022 in our latest report. Meeting students where they are and improving the postsecondary credential attainment rate is critical to our state’s future. Join us.

Washington employers will create an estimated 373,000 net new jobs in our state by 2026. Seventy percent of these jobs are expected to require or be filled by workers with a postsecondary credential—such as a degree, apprenticeship, or certificate. Bur our state is facing a crisis in credential attainment. Further, the pandemic has driven alarming drops in postsecondary education enrollment.

Our new case study explores flexible learning models that are driving up postsecondary enrollment. One particularly bright success story comes from the all-virtual Western Governors University in Washington (WGU Washington).  From 2011 to 2019, WGU Washington grew from less than 1,000 to 12,000 students. As of March 2021, there were 13,905 students attending WGU Washington, and enrollment had grown 15.8% in just the last two years.  By comparison, nearly all of Washington’s public two- and four-year institutions experienced enrollment declines during the same time period.

Washington employers are expected to create 373,000 net new jobs in our state over the next five years. An estimated 70% of these jobs will require or be filled by workers with a postsecondary credential – such as a degree, apprenticeship, or certificate. But our state is facing a crisis in credential attainment, and the pandemic has driven alarming drops in postsecondary enrollment.

Our new report explores how earning college credit while in high school can help Washington students succeed in post-high school education, examines how to increase equity in dual credit participation, and spotlights a successful partnership between Wenatchee Valley College and Bridgeport High School.

Employers will add an estimated 373,000 net new jobs in Washington state over the next five years. About 70% of these jobs will require or be filled by workers with a post-high school credential, such as a degree, apprenticeship, or certificate.

Washington Roundtable and Partnership for Learning are focused on one goal: By the high school class of 2030, 70% of Washington students – overall and within each racial and ethnic group – will complete a post-high school credential by age 26. 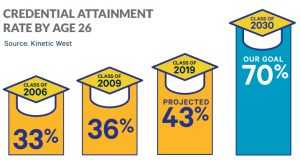 But even before the pandemic, too few of Washington’s young people, particularly young people of color and those from low-income backgrounds, were enrolling in postsecondary education and completing credentials. In our new report, learn how increasing the postsecondary enrollment rate is our greatest opportunity to ensure Washington students are ready for opportunities that await.

In the Chehalis School District, more than 9 of 10 students are graduating in four years from W. F. West High School, a higher rate than the state average. An increasing number are going on to pursue a post-high school credential. The “credential going” culture has developed out of the district’s commitment to increased dual-credit opportunities and rigorous coursework, an active partnership with Centralia College, strong supports for students who have been systemically underserved, particularly first-generation college students and those from low-income households, and active collaboration among staff. Learn more about what makes the district stand out in our new case study, which is part of our Credential is Essential series.

END_OF_DOCUMENT_TOKEN_TO_BE_REPLACED 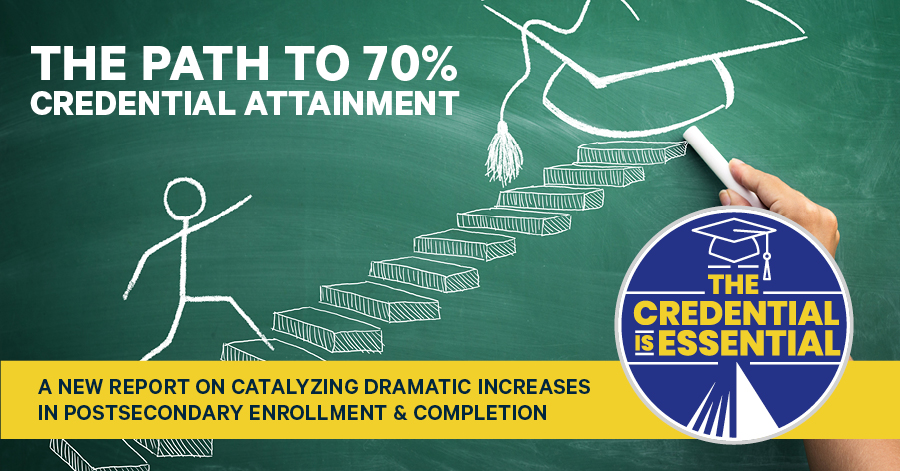 REPORT: Right now, it’s estimated that just 41% of our high school students go on to earn a credential by age 26. To ensure students are prepared for jobs and opportunity, Washington must rapidly increase the rate at which students prepare for, pursue, and complete postsecondary credentials, according to a new report from the Washington Roundtable and Partnership for Learning.

END_OF_DOCUMENT_TOKEN_TO_BE_REPLACED

More than 9 in 10 students in Spokane’s West Valley School District graduate on time. Six in 10 enroll directly in postsecondary education. West Valley is outpacing the state as a whole on both metrics, and much of that success can be attributed to rigorous expectations paired with robust guidance. See where West Valley wins in our latest ‘Credential is Essential’ district case study.

END_OF_DOCUMENT_TOKEN_TO_BE_REPLACED

High school students in Edmonds School District graduate at a higher rate than their peers statewide. They also enroll in post-high school education at much higher rates. Targeted supports, guidance, and partnerships are helping to drive this out-sized success. Learn more about where Edmonds SD excels in a new case study as part of our Credential is Essential series.

END_OF_DOCUMENT_TOKEN_TO_BE_REPLACED 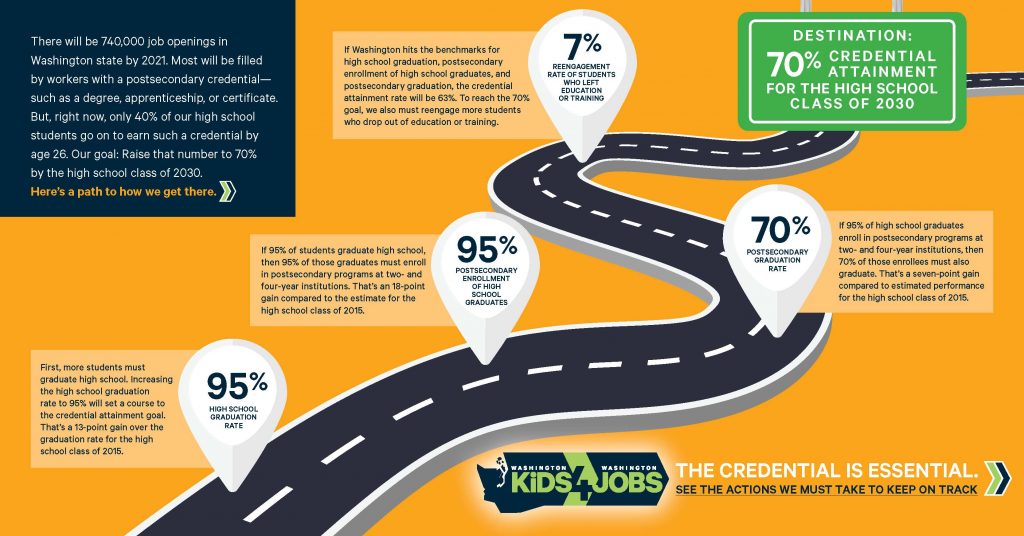 REPORT: An estimated 40% of students from Washington’s high school class of 2015 will complete a postsecondary credential – such as a degree, apprenticeship, or certificate – by age 26, according to a new report from Washington Roundtable and Partnership for Learning.

END_OF_DOCUMENT_TOKEN_TO_BE_REPLACED

REPORT: There will be 740,000 job openings in Washington in the next five years. The majority of job opportunities—particularly those that will support upward mobility and good quality of life—will be filled with workers who have postsecondary education or training. 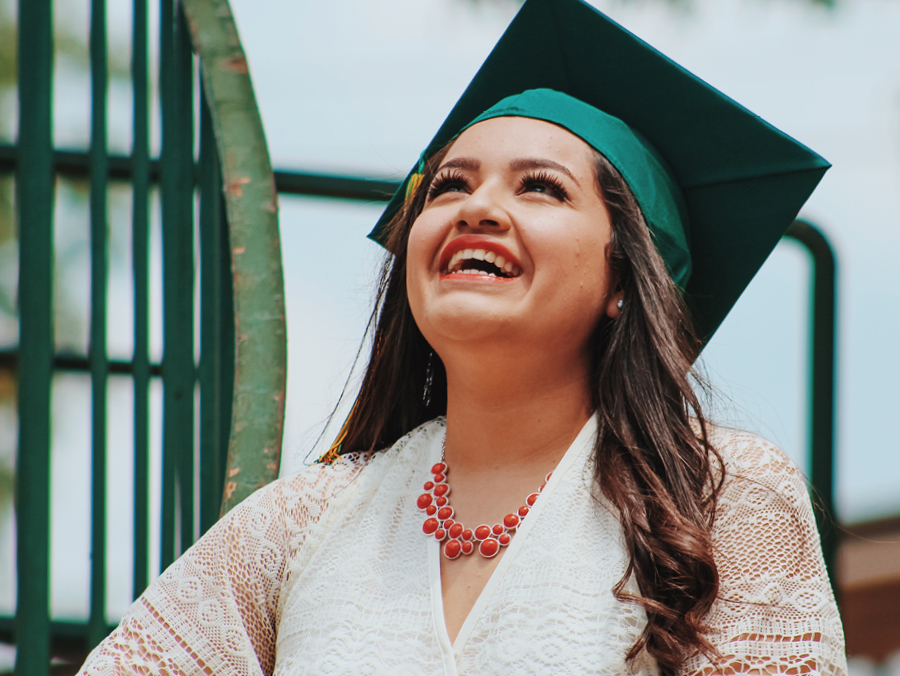